Never Too Much Chocolate!

Last weekend, our mom was desparate to get rid of some of the zucchini's she inherited from my uncle's garden, so we decided to help her out by making a chocolate zucchini cake. We were a little hesitant at first because we thought it would taste awfully dense and hard (unfortunately from past experiences)....boy were we wrong! This was...and were not exaggerating... the most moist and fluffy cake we've ever encountered! A special thank you goes out to our cousin Nicole (bakemeblush.blogspot.com) for snapping some of the best photo's of this exquisite cake (she too was drooling over this cake). 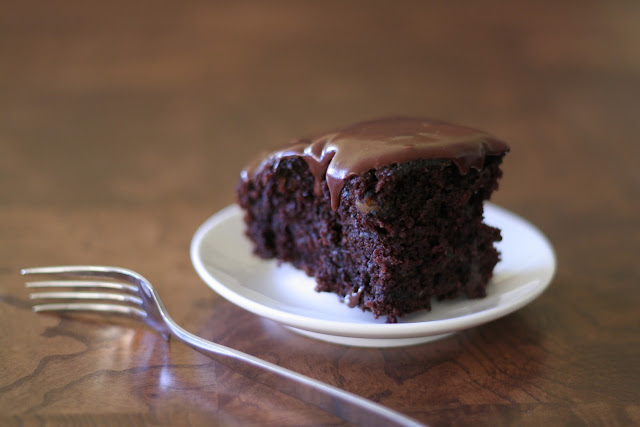 We don't think we have ever spent such a small amount of time baking a chocolate cake... it took 15 minutes! We had to bake a dessert for some company we had over at our house on a Thursday night and we didn't want to settle for a recipe we've done before..we wanted to EXPERIMENT...which is what baking is all about! We think it is safe to say that our company liked it considering they were begging for a second piece. Let's just say that this recipe was so delicious, it has been rewarded an entire page in our cookbook all for itself!

2. In a medium bowl, stir together the flour, sugar, cocoa, baking soda, baking powder, salt and cinnamon. Add the eggs and oil, mix well. Fold in the nuts and zucchini until they are evenly distributed. Pour into the prepared pan.

3. Bake for 50 to 60 minutes in the preheated oven, until a knife inserted into the center comes out clean. Cool cake completely before frosting with your favorite frosting.

RECIPE FROM ALL RECIPIES
Posted by Angela Leah and Marilena at 08:17